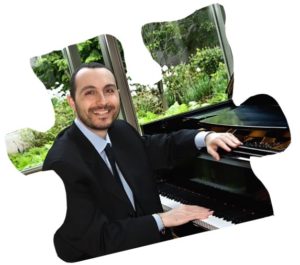 This past June, I received the opportunity to play for the concert pianist, Antonio Pompa-Baldi, so that I could be shown a new direction to learn music effectively.

He was the student of Annamaria Pennella, a renowned pedagogue from Naples, herself a pupil of Marguerite Long and Arturo Benedetti Michelangeli. Pompa-Baldi also studied directly under the great Italian Pianist, Aldo Ciccolini. Following this rewarding education in Italy, he began earning incredible recognition worldwide through winning international piano competitions. In 1999, he won the first prize at the Cleveland International Piano Competition. Two years later, he was awarded the Silver Medal at the Van Cliburn International Piano Competition.  His performance of Mozart’s Twelfth Sonata during the Van Cliburn, lovingly crafted like a Mozartkugel Confectionary, particularly enchanted me.
Since 2003, Pompa-Baldi has been a beloved professor at the Cleveland Institute of Music and continues to tour nearly everywhere around the world. Recent achievements include him recording the complete piano works of Edvard Grieg (on the Centaur Records label) and setting up a foundation for young musicians in the Dominican Republic.
My referral told me that he was a true musician, a great teacher who stood toe to toe with New York City’s best pedagogues, and that he was really, a wonderful guy with a heart of gold. Despite that last fact, I remained weary. Every time I played the piano for someone else, I always felt like the world’s biggest fraud. I often felt as if the keys would slip from my fingers, even in lyrical, soft passages. And yet, despite quite a few discouraging performances, I always kept my desire to one day play like a real master.
After a very long drive to Cleveland and a night’s rest, we arrived at the conservatory and went to Pompa-Baldi’s door. A little while later, a springy man wearing a fitted sports coat glided towards me. Following a brief introduction, he motioned me to a Steinway and I began Chopin’s Fourth Ballade. When I was done butchering the masterpiece, I found out how gracious he was.
Fraseggio
“From what I have heard, you have sensitivity and feeling.” Pompa-Baldi said, “but I can tell from listening to your playing that you don’t know how to work. When you learn a musical composition, its like you’re assembling a puzzle. Except you have to polish and refine the pieces and then fit them together so seamlessly that they form a complete picture without being segmented. “
He told me that many parts in my ballade did not fit together. Because my tonal palette was so narrow, the music sounded very flat as if I only used one color throughout the twelve minute piece. And too often, I would modify the tempo abruptly when a musical idea changed.  He leaned toward his piano, putting his hand simply and gently on the keyboard. “You need to shape the phrases and string them together. So this is about polyphony ultimately, because your playing is not very polyphonic because you don’t have a differentiated touch for each voice. “
Pompa-Baldi told me that a musical line should seldom be flat and always be given direction. On the piano he showed me that I had to learn how to apply different degrees of pressure with the fingers, because one often has to play several distinct voices in the same hand. To watch him play the piano was an education in itself.  He was perfectly relaxed, but alert. It is most important for a pianist to build a symbiosis between his or her physical movements and hearing. The beauty of Pompa-Baldi’s tone production corresponded with his graceful finger work. His hands would rise gently when the music blossomed and descend slightly when a passage called for deeper sonorities. “It’s all in the flexibility in the wrist,” continued Pompa-Baldi. “One should think about bowing rather than typing away at the keyboard. Don’t release the keys abruptly, because you have to legato and when you have to legato repeated notes, how do you legato repeated notes? Just relying on the pedal isn’t enough. Because if you bounce away, it’s too bouncy.”
“You also cannot have a note spike in the middle of the phrase,” sweeping his hand gently upwards, and then dipping it forcefully, then raising it lightly again.”Because it disconnects and destroys the idea of the phrase. When you play your instrument, you have to carefully and constantly monitor each note’s sound so that you can match it with the next one. So if by chance, one note gets too soft, then you have to match the next one and ‘re-crescendo,’ adjust, be flexible.”
If one takes a look at the sheet music of Chopin’s Mazurkas, there are much less dynamic markings than the Nocturnes or Ballades.  I always wondered how someone like Richter or Horowitz or Michelangeli could put so much heart into a Mazurka, and still have it sound as if it was the rightest and truest thing in the world, even if the score didn’t obviously say when to play softer or louder.  What I learned from Pompa-Baldi was that if the score is read carefully, one can find implied changes in phrasing, polyphony and dynamics, by observing what comes before a phrase and later(among other detective work).  After the introduction of the Fourth Ballade, a songful aria with the same rhythmic structure sings for almost two minutes. But like a mazurka, only a few dynamic markings are written in. A few bars into this section, Pompa-Baldi directed me to play the next phrase more quietly,”Why?” he asked, “Why Softer?”
“I’m not sure Professor…”
“This is just because it’s the same phrase as the one before it, but one step lower. So it’s closing, and then it starts again. We need to have inflections. In music, it’s all about speech and song.  So when you see the same phrase, and it’s going down. In this case, exactly one step down,  it’s like dimming the lights during a stage-play. It’s not always like that. But in this case it clearly is. This is how good music is. It must be vibrant and alive to touch someone. “

After we dimmed the lights, he demonstrated more at the piano, showing me that the way the harmony develops, dictates how a phrase is constructed. And how a musician should build and release tension within a line.   He urged me to stay closer and ease into the keys instead of touching them and going away instantly.
Accelerando
Nearly an hour had passed as soon as we reached the fourth page. “As the Ballade progresses, it gets more and more complicated,” Pompa-Baldi warned, “because the polyphony gets richer and richer.” He worked diligently with me on a substantial section where two voices were played within the right hand, a songful variation of the theme combined with a fluid chromaticism, along with a more resolute bass in the left hand. “But the principles are the same” said the Maestro.  When this variation climaxed with a dramatic phrase that included an accelerando, Pompa-Baldi stopped me:
“This accelerando is one of several ones that you did where you just change tempos. You don’t do an accelerando. It has to be gradual to be an accelerando. That’s not an accelerando. That’s a change of tempo. That’s a very different thing. You do tempo! Tempo! Tempo! Tempo! Tempo! Four times fast! It just doesn’t make sense logically!  You instantly switch into a stage of feverish excitement. That’s another way of breaking the music into segments. You have to reach the full experience, by following the growth. There is no switch, on and off. It’s like for human beings.  It’s not natural that you’re depressed one moment and then there is a switch where you instantly get excited or enthusiastic. It’s a process. It can be quick like in this case, but it’s not instantaneous. It has to be a progression. And those indications, it’s not just to go fast.  You have to allow the music to reach the excitement. “
For a few minutes, I was not particularly good at following his instructions. Out of nerves or ignorance, I was unable to follow the beats.  He seemed bewildered, but I eventually came back to my senses to play a more “subtle” accelerando, with him clapping along––albeit under tempo:

“Almost, almost, almost. So this is already quite a bit of accelerando in it. Nothing compared to what you were doing before, but it’s already quite a lot. And this is as much as you need. No more than this. And if you focus on the beats, you’ll always know where you are. Rhythm is such an important component. Rhythm is not metronomical in the sense that you run the music like a computer program with no changes in tempo from beginning to ending.  But the sense of rhythm is different than tempo. The tempo can change, but your sense of rhythm is tied to your awareness of the pulse, and awareness of where the beats are and even where, not so much in this case, but, even where the subdivisions are. Like half a beat. Especially when you have long value notes, you want to think in slow movements for example. You want to think of the subdivisions contained within that note. So that, you always know how long it needs to be and you find a way to do it naturally. Otherwise it’s always going to sound shortened or too long.”
Very Close to the Keys
We went through quite a few other passages following the accelerando, looking deeper into the harmonies and going deeper into the keys for more color.  By then, two hours had passed since I first sat down to play. After the lesson, Pompa-Baldi spent quite a bit more time with me, asking questions and trying to get to know me better. He assured me it was not too late to master the piano, but that a lot of work lay ahead. Pompa-Baldi took great care in reminding me how to practice well and truly wanted to change the nature of my approach to the keyboard. Even though he talked about ideas specific for the Ballade, many of them were concepts that I should apply to everything I played.
“[…]Very close to the keys. That should be your credo and your motto from now on. Because anytime you don’t need to have your fingers fly about, there’s absolutely no reason for it. It’s a waste of energy, waste of motion, impossible to connect and create lines, phrases. You don’t want to keep them tied to the keys by being tense, but you want to really mold your fingers to the keyboard. That is the highest achievement for the pianist. Forget that you have fingers. They should only be an extension of the keyboard. You don’t hit the keys. Sometimes. But not in legato melodic playing like this. Now as for Prokofiev…”
Those nimble fingers that played Chopin’s melodies with such tenderness and nobility, suddenly morphed into a flurry of pistons and axles as he brandished off a vigorous passage from the third concerto.  “Hit them as much as you want. But always with logic there too.”
This Friday and Saturday, Antonio-Pompa-Baldi joins the West Virginia Symphony Orchestra in Edvard Grieg’s Piano Concerto at the Clay Center in downtown Charleston,WV.
Like Antonio Pompa-Baldi on Facebook
Like West Virginia Symphony on Facebook